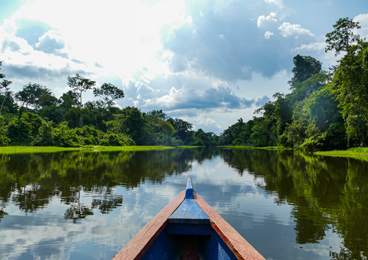 The Colombian Amazons is part of a much larger region shared with Venezuela, Brazil, Peru, Ecuador, Suriname, Guyana and Bolivia and is also considered the lungs of the world. With more than seven million square kilometers, it is a giant carbon dioxide storage and oxygen producer. As an autonomous country, the Amazon region would be the ninth largest in the world. According to the World Wildlife Fund (WWF), the wealth of flora and fauna includes 158 amphibians, 674 birds, 212 mammals, 195 reptiles, 753 fish and more than 6300 plant species.

The Colombian department of Amazonas is the southernmost region of Colombia. It consists almost exclusively of large tropical forests. The climate is warm and humid, with an average temperature of 25 degrees Celsius and rainfall all year round. Due to the partly strong and long-lasting rain and the associated flooding, road construction is not possible. Traffic routes are therefore mainly via air and water. The capital of the department is Leticia and is surrounded by rainforest and the Amazon river. It is a border triangle with direct border with Peru and Brazil. Leticia stretches over the border, but is called Tabatinga on the Brazilian side. You can cross the border on foot.

The diversity in the whole area is huge and is not limited to the animals and plants in the area. The local communities are also very different. Most of them like to receive visitors to share their typical dishes, fruits, traditions, customs, dances and unique scenery. A few of the indigenous cultures that can be contacted in the Colombian Amazon are the Uitoto, Ticuna and Bora. However, there are still tribes that have no contact with the western world.

There is no land connection between the town of Leticia and the rest of the country. The fastest, easiest and safest way is therefore by plane. From Bogotá the flight lasts about two hours. On the Brazilian side, in Tabatinga, there is also an airport.

In Leticia, however, there are roads and public transport. Tuc Tuc taxis are the preferred means of transport. On the Amazon and its tributaries boats are used. Places like Isla de los Micos and Puerto Nariño can be reached quickly. International connections also exist by ship. Iquitos (Peru) can be reached in 36 hours or 8 hours by speedboat and Manaus (Brazil) in 3 days.

The Pirarucú is one of the most emblematic fish in the region, a giant that can grow to more than three meters in length and 250 kilograms of weight. In his honor, a festival takes place every year on November 28th, bringing together the culture, gastronomy, traditions and music of the Amazon. Residents from all three countries (Peru, Colombia and Brazil) participate.

The Amazon is a very humid and warm region throughout the year. The average annual rainfall is 3194 mm. The rainy season is from January to March. The river level of the Amazon can rise by up to ten meters during this time. The season with the least rainfall is from July to August. The river retreats and reveals the otherwise flooded land. In every season, the landscape is different and the transport routes adapt accordingly.

The average annual temperature is 25° Celsius. Maximum temperatures of over 30° Celsius are measured in the months of October and November. In general, a yellow fever vaccine is recommended ten days before arrival. Protect yourself from mosquitoes, which occur in the area in large families.

Most activities are also held in the jungle. Wear bright and long clothes and protect yourself from the sun. Depending on the weather, the good old rubber boot is probably the best shoe choice.

Activities in the Amazons

The river itself is not only the main traffic axis, but also a huge ecosystem. The observation of the pink Amazon dolphin is one of the main attractions of the region. The 200 kg mammal measures about 2.50 meters. During a boat tour, you will always come across schools of these impressive animals.

This nature reserve and environmental education center is located near Leticia. A local guide shares his knowledge of the different cultures and communities that have inhabited the area for thousands of years. A nature trail teaches a great deal about the most representative species in the region and their use by the inhabitants. In an aquarium you also have the opportunity to get to know the local water world and its inhabitants.

Just under an hour’s boat ride from Leticia is the Marashá Reserve. Depending on the river level you can get to the main building by boat or on foot. The path is the destination, as the local guides explain all the animals and plants and you have the opportunity to see sloths, monkeys, a great variety of birds, insects, reptiles, and huge trees. At the main building, which is located by a small lake, you can do kayaking, fishing, night safaris, fishing for alligators, or relax in a hammock and enjoy the beautiful scenery.

Tanimboca is only 30 minutes away from Leticia. In this reserve, you have the opportunity to sleep in tree houses in the middle of the jungle. A unique opportunity to experience all the sounds of the jungle up close. Night safaris are offered. With a local guide you can find a variety of animals such as tarantulas or poison dart frogs. This park also offers Canopy, where you move in the treetops and experience the jungle from the heights.

75 kilometers from Leticia, Puerto Nariño is the second largest community in the department. The community, known as “The Crib of Colombia,” is a great example of how humans and nature can live together sustainably. Cars are banned and waste is recycled. The residents also use Rainwater. You will find peace and nature there.

On a small island, which is accessible from the water, live flocks of small monkeys, which are used to humans. The monkeys climb on the visitors and show no fear. Like in the circus, the little creatures jump around among the visitors and use them as a ramp. The monkeys move freely and disappear again in the trees, if they feel like it. Upon entering the island, some stalls sell “Palo Sangre” products, a very resistant reddish wood.

In this small town of the Ticuna ethnic group (an ancient community that has lived in the Amazon for centuries), visitors have the opportunity to get to know its inhabitants. Products made from traditional Palo Sangre are on offer. There are demonstrations and dancing, with visitors invited to participate.

Puerto Alegría is a small village on the Peruvian side of the Amazon, where residents offer tourists the opportunity to feed and in some cases take wildlife pictures with animals such as anaconda, sloths, wild cat, monkeys and birds. Pelecanus does not offer this destination because it is not a species-appropriate animal husbandry. According to studies, these animals suffer from immense stress when they come into contact with humans and usually end up dead in captivity after a short time.