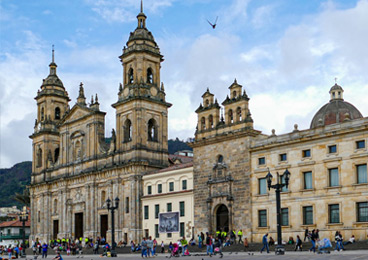 Guarded by Monserrate and Guadalupe sanctuaries, the capital of Colombia is the political, economic, administrative, industrial, cultural and tourist epicentre of the country. Located in the middle of Colombia at 2630 meters above sea level, it’s the world’s third highest capital, a condition that gives it a cool mountain climate that ranges between 6°C and 18°C. The capital has the Sumapaz Paramo among its priceless treasures, the largest in the world and the most important water source in the country. The city’s diversity can be explained by its history; it was erected on the struggle of its first settlers Muiscas and the Spanish conquerors, whose most characteristic footprint resulted in this confrontation which is the coexistence of pre-Colombian traditions with European-influenced architecture. Bogotá represents multiculturalism and the harmonious existence of colonial history and contemporary bet. Because Bogotá is a focal point of people from all regions of the country, it’s a great mixture of the best of Colombia, turning it into an open-door city which offers excellent gastronomic, cultural, economic, ecological and artistic, a place of infinite possibilities.

If you are looking for even more information we can recommend you to check out our Bogota Travel Guide. Anyway, as a Bogota based travel agency we will give you the best advise you will find about Colombia.

The international El Dorado airport is 45 minutes away from the historical centre. The journey duration varies depending on the traffic in the city.

Bogotá is known for having varied and constant cultural offerings throughout the year, mostly free. Some of the most important events of the year are:

For the visit to the hills of Monserrate and Guadalupe, we recommend the use of footwear and sportswear, as well as constant hydration.

Due to the altitude of the city, the use of sun protection daily and during the day is imperative. In addition, we recommend maintaining a moderate physical effort and drinking liquids constantly as part of the acclimatization process to the low oxygen pressure.

Bogota has an unpredictable climate; during the day, the temperature can increase considerably, however at the drop of a hat, it can start to rain which is why we recommend always carrying umbrellas and seeking shelter.

The collection of the Gold Museum of the Bank of the Republic has been declared a National Monument and considered one of the most important of its kind in the world. It houses more than 34,000 goldsmiths’ pieces and 20,000 lithic, ceramic, textile objects and precious stones belonging to the Quimbaya, Calima, Tayrona, Sinú, Muisca, Tolima, Tumaco and Malagana cultures, among others.

Thanks to a donation made by Fernando Botero to the Bank of the Republic that includes 208 art works that combine his own art with international artists, we can enjoy one of the most impressive art collections in the country.

Located in what was once the city’s archbishopric, this museum, which opened in 2000, allows all the city’s visitors to have a space to get in touch with great masters and the most important artistic currents of our era.

This Quinta belonged to the liberator Simón Bolívar in 1820 as a sign of gratitude by the government of New Granada. The Quinta was Bolívar’s residential place, where he also celebrated his military victories and sheltered after the Septembrina conspiracy. Visitors can walk through its rooms and get a close look at the liberator’s everyday life at that time.

Located at 3,152 meters high in the Eastern Hills, Monserrate stands as the icon and main custodian of Bogota. Its great tourist influx is mainly due to the magnificent city’s panorama that the sanctuary offers. The hill has been a place of pilgrimage since even before the colonial time. Many devout believe that El Señor Caído de Monserrate has healing powers, which is the reason why annually, this sanctuary receives thousands of pilgrims. You can get to the hill hiking in the pedestrian path, by cable car or funicular.

The Metropolitan Simón Bolívar Park is the biggest and most important one in the city. This is Bogotá’s lung in the heart of the city which has become an essential part of the inhabitants’ life, because of its green spaces and for being a venue of many cultural, sporty and artistic events.

The José Celestino Mutis Botanic Garden is the largest in Colombia and the main research, education and leisure centre in the Colombian capital. This colourful garden has representations of the cloud forest, conifers zone, Andean forest, oak groves, medicinal plants and a circuit of greenhouses with plants of warm, dry and rainy climate.

La Candelaria preserves the colonial and republic heritage. Here, you will find the main attractions of historical and cultural interest. Its narrow and colourful streets were the cradle of the Spanish and Criolla aristocracy.

The tour in the historical centre includes a visit to the main museums, where the history of our independence is preserved, old houses where illustrious people lived, Bolivar Square, home of our capital, among others.

The centre of Bogotá brings together many universities and is also recognized worldwide for the street art that communicates different messages of social, cultural and artistic themes.

This area of Bogota is renowned for bringing together wide and quality gastronomic offerings (hence the G “Gourmet”). It also has several hotels and some of the most exclusive neighbourhoods in the city.

This place gathers much of the culture and tradition of Bogota. It offers the visitor a sample of the traditional foods of the region along with one of the most important products in Colombia, flowers, and many other products.

An important area of the city where you can find the best of Bogota nightlife. In addition, there are important shopping centres and exclusive shops, perfect for a shopping afternoon.