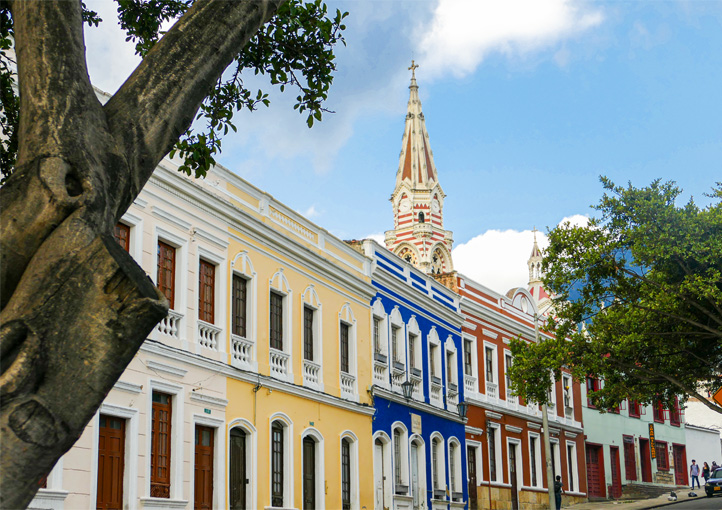 La Candelaria or the Historic Center of Bogota, Colombia

La Candelaria is the historic and colonial center of Bogota. It was founded in 1538 and the foundation stone was set when the first church was built. For a long time, La Candelaria was considered the place of power and wealth, and the upper class resided in stately villas, some with several courtyards and gardens.

However, this suddenly changed in 1948. Jorge Eliécer Gaitán Ayala was considered a promising presidential candidate and was also the first candidate of the people, who apparently did not belong to the corrupt elite, which has favored the redistribution from bottom to top since times immemorial.

He was killed during his presidential campaign, leading to a 10-year civil war, which also went down in history as “La Violencia”. After Jorge’s death, the people were so upset that the riots escalated in the hours that followed. The result was over 5,000 deaths and a destroyed city center. Since then, there have been no trams, as their infrastructure was also affected.

As a result, many rich and powerful sought alternative residential locations further north in Bogota, where one could lock oneself with high walls. Even today, many Colombians live in so-called “conjuntos”, sealed-off residential complexes. However, this form of living reminds me more of prisons.

When I first traveled to Colombia in 2009, I spent the first few days in a hostel in La Candelaria. However, I soon discovered that this zone was probably not the best in the city. There were many homeless people and other suspicious characters on the streets. I was also advised not to leave the house after dark. At the time, I found the neighborhood to be very run down.

The situation could not be any different today in 2020. I came back to Bogota in 2015 to study and looked for accommodation in La Candelaria. International tourism has been developing since 2009 and there have been masses of backpackers and also higher segments of the tourism flow into the old town. This trend has increased over the years.

Since I arrived in La Candelaria, a lot of investments have been made, buildings renovated, the central market hall completely renovated and a street for pedestrians set up. La Candelaria would have the potential to become one of the most beautiful old towns in South America, because the basic structure is there.

However, some sins were committed with ugly new buildings in the middle of the historic city. Again and again, I see today that-unsuitable new buildings are being built in the middle of a series of historical buildings. Until today, unfortunately, the historical core has not been adequately protected. Corresponding laws seem to exist, but the corruption common in Colombia unfortunately makes them ineffective as paper tigers.

Nevertheless, La Candelaria is regaining its radiance more and more. In any case, as a political center of the country, with the seat of the president and the parliament, its importance is given.

Like some main squares in Colombia, the most important square in Bogota is called Plaza Bolívar. It has an area of ​​approximately 14,000 square meters (150,000 square feet) and a capacity of over 55,000 people.

The square is surrounded by the Palace of Justice, the Catedral Basilica Metropolitana, the Capitol, and the congress building.

Today the square serves as an excursion destination, as a tourist destination, as a meeting place and there are also concerts. The square also forms the beginning of the pedestrian zone of Carrera 7. The square is an ideal subject for photos. Feeding pigeons is also popular. You can buy corn on-site and then be photographed in a flock of voracious pigeons.

But be careful, pigeons are known disease carriers and, therefore, feeding is prohibited in many cities around the world and populations are controlled by systematic reduction. 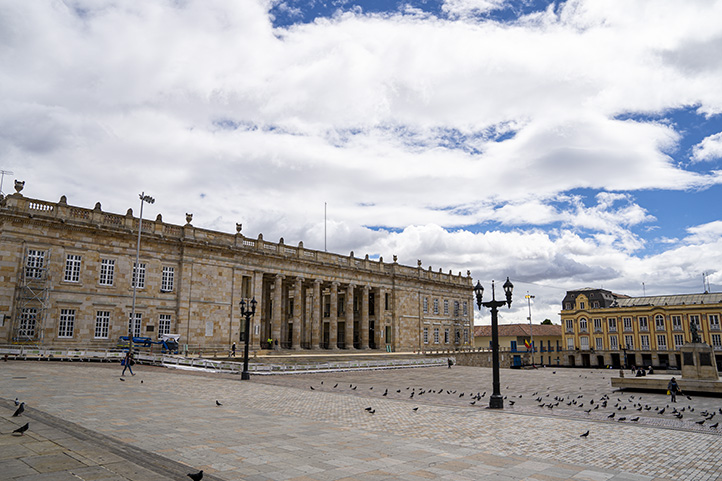 The Botero Museum is probably one of the most important museums in Colombia and foreign visitors are always surprised that the exhibition is not just about a few chubby people.

Fernando Botero Angulo is probably the most famous Colombian artist and is still among us, he was born in 1932. His donation of 208 pieces in 2000 was valued at over $ 200,000,000. 123 works of art are his own, 85 by international artists and grandmasters. Among them are names like:

The museum itself is located in the heart of the old town and was established for this purpose. Admission is free and, unbelievably, the artworks can be viewed without restrictions. I also definitely recommend a visit to people who are not art-savvy. 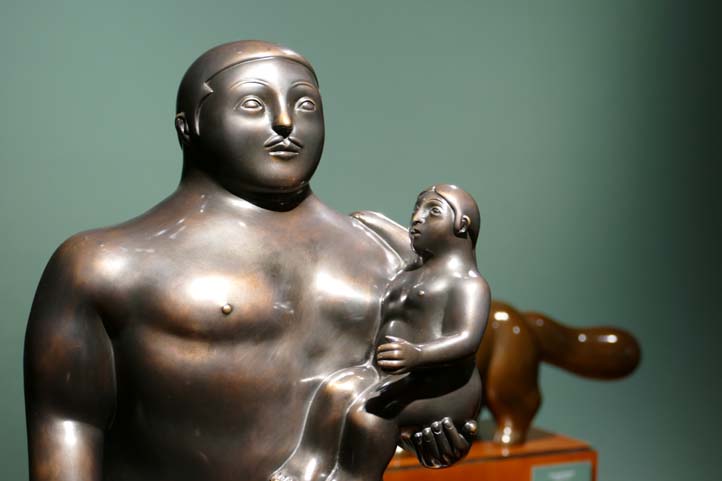 The La Puerta Falsa restaurant, which translates to ‘the wrong door’, is considered the oldest restaurant in Colombia. The building was built around 1600 and the restaurant has been in operation for over 200 years.

The inside of the restaurant is bigger than it seems from the outside and typical Colombian dishes are offered. Here are a few dishes for further research:

The House of the President Casa Nariño

Casa Nariño is the official seat of the President. The Palacio was completed in 1908. There is also an old observatory in its garden.

To visit, you have to register online and submit your information. These are then subjected to a security check. Tours are offered in Spanish and English and you will receive a confirmation by email. Tours can also be canceled or shortened at short notice. When registering for a tour in English, there may be no English-speaking guide on site.

I can absolutely recommend the tour! The house alone is a feast for the eyes and the contained works of art and furnishings as well as the associated stories are an absolute highlight. 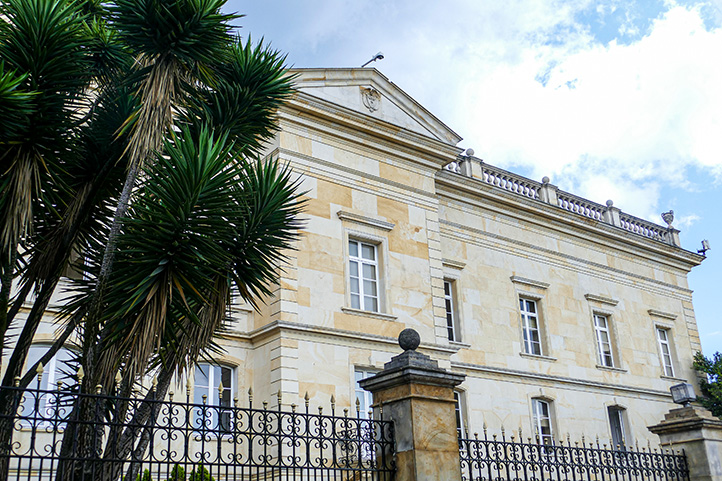 The Teatro de Cristóbal Colón is a member of the 7 wonders of Colombia and is located in the heart of the old town, not far from Plaza Bolivar. The cornerstone of the theater was laid in 1885 and the building is designed in a neoclassical style.

The capacity is 900 spectators and there are regular performances. However, the theater can also be visited on a tour. However, public tours are only offered in Spanish.

Not only is the theater beautiful, the history and organization as a theater are also very interesting. I can absolutely recommend a visit. 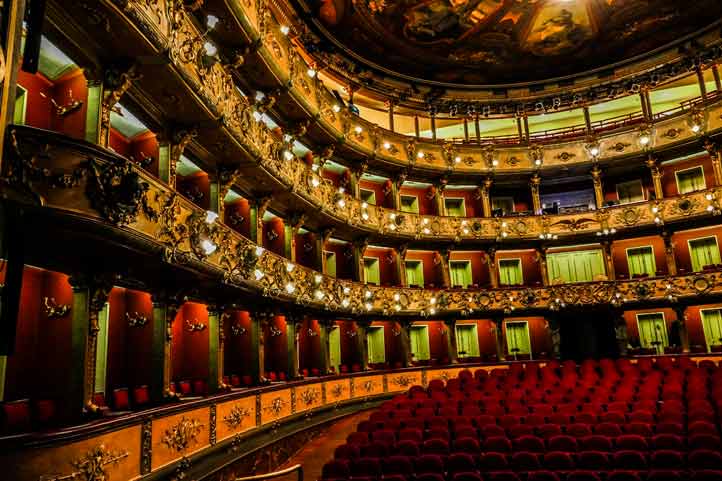 The Chorro de Quevedo, or simply called Chorro among residents, is considered the birthplace of Bogota. The small church of San Miguel on the outskirts is a replica, but is considered the first church in the city.

Today the square serves the public and there are public art performances in front of the church. Chicha is also offered everywhere, a historic drink made from fermented corn. If there are no police officers on the square, marijuana is smoked vigorously and alcohol is drunk.

Public alcohol and drug use are generally not allowed in Colombia. 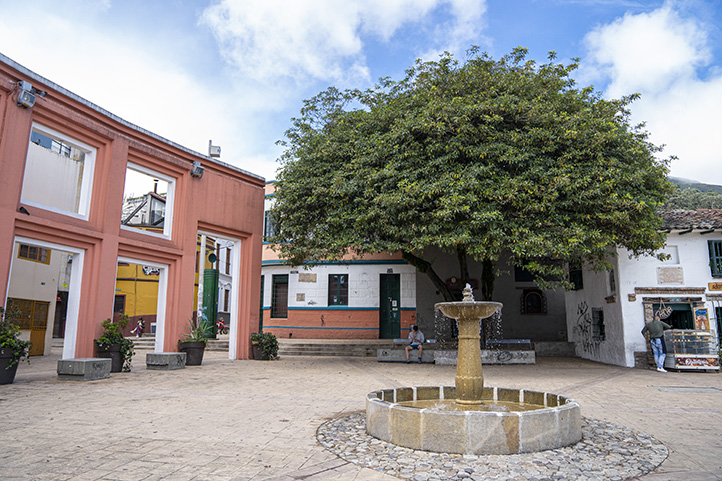 Rooftop coffee from the University of Externado

This is a tip that you probably won’t find in any other travel guide. I also discovered this coffee by accident when I was looking for a suitable place to fly my drone over the old town.

Externado University is a private university and one of the best educational institutions in Colombia. The striking and tall buildings are visible from afar. There is a coffee on the roof of one of the buildings, from which you can have a wonderful view of the old town.

When you enter the building, you are usually stopped and questioned by a security guard.

The Palace of Justice, which is located on Plaza Bolivar, is not only one of the most famous buildings in Colombia, but also achieved international fame with the Narcos series on Netflix.

The striking building was occupied by guerrilla group M-19 in 1985, after which the Colombian military arrived with tanks. The images of heavily armed soldiers who stormed the building still go around the world thanks to Netflix. 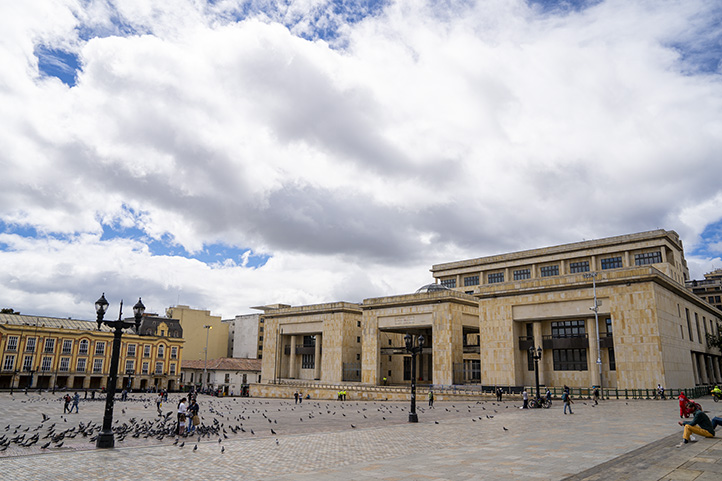 The building in which the military museum is housed is a real feast for the eyes. In the courtyard, which can also be seen from the street, you can already see military vehicles and cannons.

As a former infantry officer, I found the museum very exciting and would highly recommend a visit. 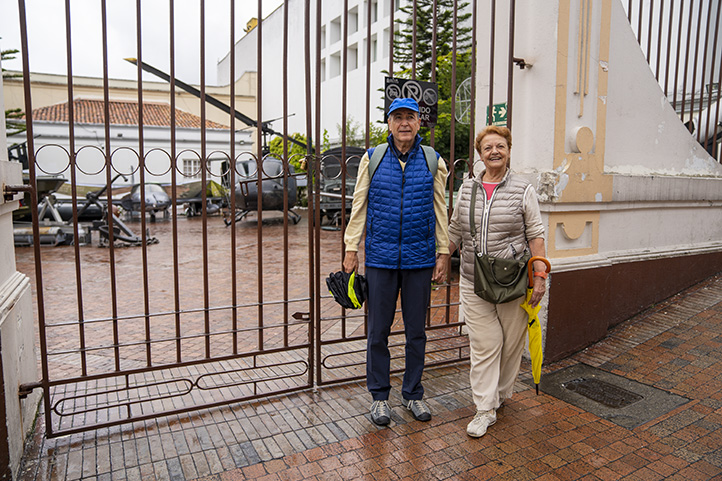 The library is a real colossus within the old town, but in my opinion, it is also an architectural monument. Access is free, but you have to go through a metal detector.

The library was founded in 1958 and today has 1 million books. There are also various rooms for events, sound recordings, and a concert hall.

The Cathedral of the Immaculate Conception is located on Bolivar Square and cannot be overlooked. The current building was built in 1823 after three previous buildings.

The forecourt is perfect for taking photos of the square and the stairs to the square are mostly populated by many people. 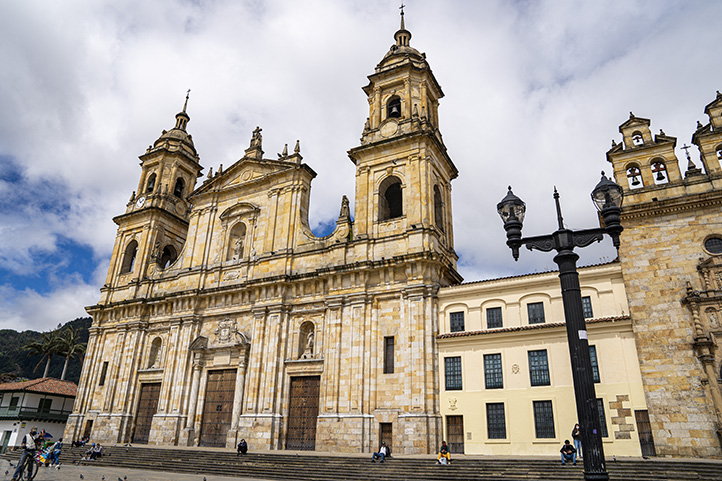 In my opinion, this church has the most striking appearance of all churches in Bogota. The white and red pattern can already be seen from a distance.

The church, which was completed in 1938, keeps the striking colors inside. If you’re visiting a church in Bogota, I can absolutely recommend this one. 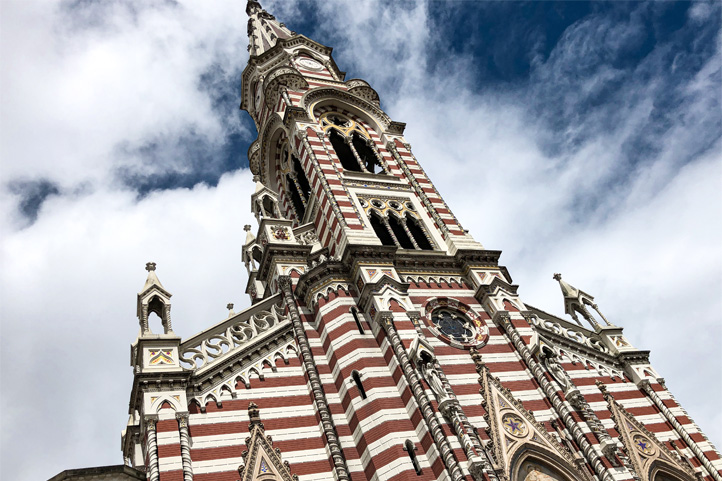 Carrera 7 is now a pedestrian zone and it can become quite chaotic especially on Sundays and public holidays. Countless streets of artists line the way and everything from robots and predators to dancing old men with strange moustaches can be found.

In the course of the day, cyclists, pedestrians, artists and salespeople in all variations crowd on this street. It is a truly local experience and I highly recommend a visit. 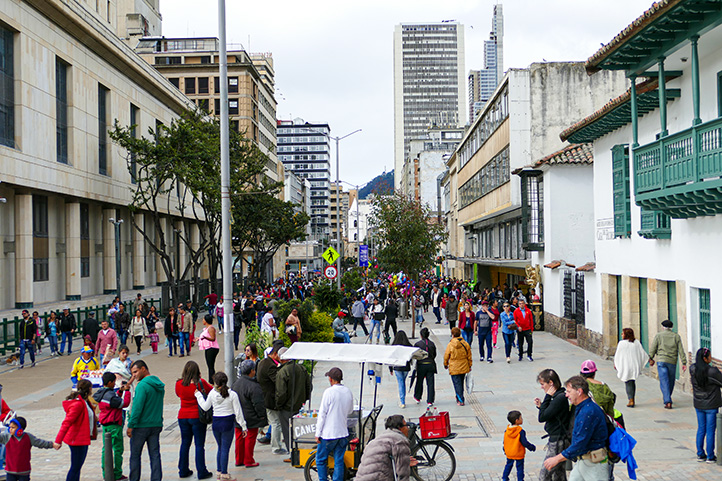 The former home of the general and liberator Simon Bolivar is just a few minutes’ walk outside the old town. Halfway to the local mountain Monserrate and lying next to the University de Los Andes, this converted house gives an insight into life in the 19th century.

The street to the market and the main building have been recently renovated. All visitors who want to gain an insight into the country’s agricultural products or are looking for a cheap lunch, this is the right place for it. In any case, I am a regular visitor. 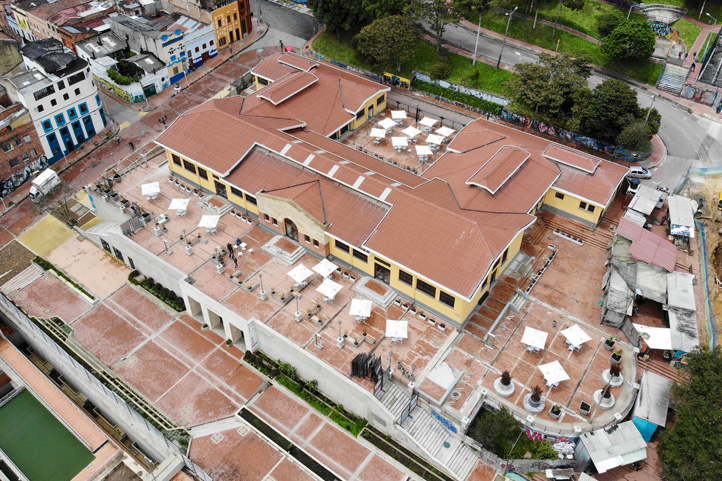