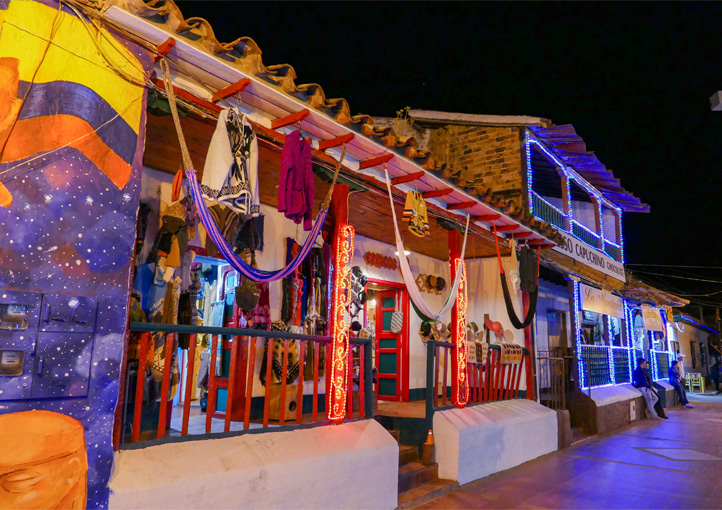 Festival of lights throughout Boyacá

There are many beliefs and traditions that the Colombian culture has kept for a long time. Of these, one of the most representative is the Christmas lights that decorate the streets and houses of Colombians during the month of December and part of January. This is a tradition that, like many others, was brought from Europe and the United States along with the Christmas tree, the manger and Santa Claus, at different times in history.

The department of Boyacá is one of the departments in Colombia that has maintained the most Catholic traditions. The holiday season is one of the most important of the year along with the Holy Week, beginning on December 7 with the day of the candles, and the 16th with the feast of Aguinaldo, after 9 days, celebrating the arrival of the child God, to midnight on December 24, known as Christmas.

By the way, in our Boyaca tourist information you will find more information about this fantastic department.

In Boyacá, Spanish heritage was brought from Europe during the time of the colony. Representative elements of the indigenous and Spanish culture can be appreciated and incorporated through objects such as the Ruana, a poncho-style garment that the Muiscas used from pre-Hispanic times, combined with the use of the hat. Or even musical instruments used in the traditional festivals of the region such as the guitar, brought from Spain, accompanied by instruments such as the capador (panpipe), a legacy of the indigenous Muiscas.

Among all this multiculturalism, you will see how the use of lights has been adopted in public and private lighting throughout the department. Gradually, the different towns of Boyacá have developed an interest in showing their visitors the best and most creative exhibitions of lighting and illuminations of the different spaces, together with impressive nativity scenes that represent the birth of Jesus Christ.

The department of Boyacá is likely one of the most visited tourist destinations at the end of the year as visitors love to be amazed with its beautiful exhibitions of lights. These begin at the Boyacá Bridge, one of the most emblematic sites in the history of the independence revolution in Colombia. On the way through 123 municipalities of Boyacá, the most important to mention would be Tunja, its capital, Sora, Nobsa, Corrales, Villa de Leyva, among others. The latter, a national monument, with its beautiful architecture, offers visitors a show of lights and pyrotechnics on the eve of the night of the candles.

Throughout the department, different festivals and fairs are held at this time, attracting both locals and tourists to the celebration accompanied by music and traditional dances. This cold and mountainous region of Colombia is also recognized for its delicious food and desserts. The Spaniards introduced the Christmas holidays here, Christmas carols, the good night, the manger and the party to be later fed by the indigenous tradition that resisted being erased and forgotten by the memory of its inhabitants.

Boyacá is a place that is worth visiting throughout the year, but in December, it finds its maximum cultural expression. There are many small places that strive to continue feeding ancient traditions and adopt new ones, hand in hand with beautiful displays of creativity through lights, fire and pyrotechnics. The combination of colors and images that have a story to tell will be the main elements to enjoy during the Christmas season.