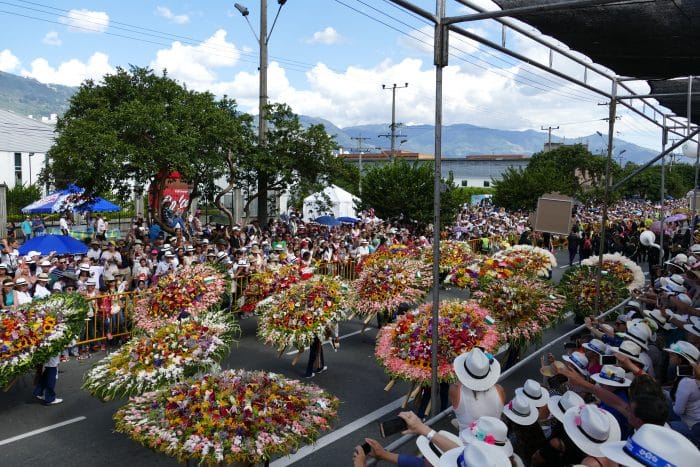 Traveling to Medellin is always fun: the climate is great, the women are beautiful and the people are nice and friendly. I was therefore in a very good mood when I hopped on my plane at the beginning of Augusta. I recommend that anyone who comes to Colombia makes time to travel to Medellin.

If you are looking for further information about Medellin? Check my Medellin Colombia Travel Guide.

What is the Flower Festival in Medellin?

Colombia is a festive country, and thus you are likely to encounter many Colombian celebrations and holidays during your visit. If possible, however, I recommend attending Medellin’s most important festival, the “Feria de Flores”, or the “Festival of the flowers”, that has existed since 1957. The festival celebrates the end of slavery, during a time in which slaves carried men and women uphill on their backs. But instead of people, now the “silleteros” carry flowers on their back. When I say “flowers”, I mean works of art weighing up to 100 Kg!

Today, the event is 10 days long, and there are several other events held during the festival. There is a fair, contests, and even a historic car parade. Travel agencies offer tours to the flower producing farms, bringing busloads of tourists from nearby towns to visit the farms. During their visit, the tourists learn how the flowers are cultivated and how the silleteros prepare their works of art for the main parade. By the way, Colombia is one of the world’s largest producers of flowers.

One of the most important villages and a place certainly worth visiting is Santa Elena. I went to “La Finca Silletera Los Girasoles” with my friend, Silviana, who is the owner of the local travel agency I work with. I learned all about the history of the festival and how the participants of this village usually win all the prizes at the parade. I was also told that becoming a silletero is a birthright and thus can only be inherited. I also found out that starting to drink Aguardiente (a strong alcoholic beverage) at 9am is not unusual during Feria de Flores.

On Monday, when the main parade was held, Silvi told me to meet him at the entrance before 10am. I was a bit confused, seeing as the show was to begin at 2pm, but she explained to me that this event is so popular that if you arrive late, you risk not being able to bypass the enthusiastic crowd to arrive at your seat.

The Parade of the Silleteros

I arrived at 9.30 am and quickly learned that my friend was not exaggerating. On one side of the road, where the parade would be held, were stands. When I arrived, they were still empty, as they would not open until 10am. The other side of the road is for the general public, and locals were already lining up. People brought chairs, blankets, food, coolers, umbrellas, etc.; it was like on an open-air festival. I learned that the first people had arrived there at 5am. Street vendors were selling food, chairs, and other items to make the experience more comfortable.

Finally, I got my hands on my ticket. I brought my kindle on the off chance that I would be bored waiting around, but as it turned out, I did not need it. Our stand, which had a capacity of approximately 400 people, was reserved solely for tourists. Most were from other places in Colombia, a few were from other countries in Latin America, and a few were from outside the region. Surprisingly, foreigners on holiday were a real minority.

At 10.30 am the area was almost full of people entertaining themselves as they waited. People were, chatting, eating, drinking, and some even started a singing contest with people on the other side of the road. On this sunny day, the temperature was already around 25 degrees.

As a Swiss, I found the dynamic between the people to be amazing. In contrast to Colombians, Swiss people are known for being sober accountants who pass their days counting money. Even after living in Colombia for 2 years I still did not expect to see such a spectacle inside another spectacle. I was asking myself, why do these people even need a parade? Has it not already begun? The festivities included just about everyone, from little kids to the grandma in front of me. She had to be over 80 years old, measuring only 1.40m, but she could sure shake her booty. I couldn’t stop smiling!

The first trucks arrived, with DJ’s, dancers, and free gifts that were thrown into the audience. Silvi told me that this was just the beginning with commercial floats from big companies. It was very entertaining, and everybody was out of their seats and dancing to the music.

Two hours passed, and I was still being entertained by the audience. Then, the main parade arrived. It was divided into different categories like classical, traditional, commercial, and I guess freaky! At times, I could not believe my eyes! The men were transporting incredible flower monuments on their backs. While they carried their heavy loads, each group had scouts that helped and took care that nobody fell while carrying these wonderful pieces of art.

And this was not the only thing the parade offered. The local authorities also presented themselves: firefighters, military members, cleaners, police- you name it. Huge bands played classic music while others provided incredible drum concerts. Dancing groups performed and launched group members in the air. Performance and costume artists also had their slot.

The audience did not get tired of singing, shouting, and partying despite having been there for hours. I think this energy is what kept the men walking with their heavy-duty flower backpacks, which sometimes represented whole cities or historic events.

After almost 3 hours of flowers, the parade came to an end. Undoubtedly, the Festival of the Flowers is a great opportunity to get a real Colombian experience and certainly one of the highlights of Medellin tourism. At a distance of about 100 meters behind the final parade car, a whole army of cleaning trucks and uniformed workers came along, leaving not one piece of garbage behind them. It was almost as if the parade had never happened. I look forward to returning to see this parade n next year!